1 (Chill 1: add 1 chill to target until next turn. Units with chill greater than or equal to their health cannot block.)
[data page] 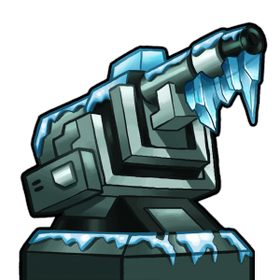 Cryo Ray is a

chilling Green unit with a limited number of uses. It's a source of inexpensive, fine-grained chill.

Cryo Ray is a cost efficient source of

chill which provides strong breach pressure through its

ability. Compared to Frostbite, it has less raw

chilling power but is more precise and has 3 uses instead of one.

chill, allowing you to freeze small

blockers such as Engineer and temporarily negate your opponent's defensive granularity, or even to freeze all of your opponent's absorbers to deal full damage to their defense. You have to use them wisely though, since they have limited supply and activations.

Be careful not to always take every opportunity to exploit your opponent with Cryo Rays, because if it takes a lot of charges for only a small exploit it may not be worth it. For example, if you must freeze 5 Engineers to exploit for 1 and your Cryo Rays are already on

2hp, you probably should not do it because then your opponent can start gambiting against your now-

green with an early Conduit or using them in combination with Synthesizer or Gaussite Symbiote is advisable.

When you have an extra 1

to spend in a real game, Cryo Ray is nearly always preferable to Gauss Charge barring a breachproof opponent; both force out one point of defense from the enemy, however, Cryo Ray may be able to exploit by freezing something and thus force out a second point of defense.

Cryo Rays are one way of denying value to blockers on their last Lifespan turn. Freezing a

1 Lifespan is equivalent to dealing it damage, which is very good value (Cryo Ray can chill three times and costs as much as Gauss Charge which only deals