From Prismata Wiki
Jump to: navigation, search
This article is a stub. You can help Prismata Wiki by expanding it.
Colossus 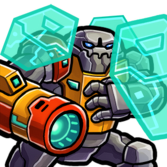 Colossus is a Green-blue-red unit.

Colossus is a very strong attacker, and is also one of the highest-defence blockers in the game. Generally, maximum value is extracted from Colossus by letting it defend once for 7 damage, thus expending all the Soak, then subsequently using it as an attacker. Offering similar defense value to an Infusion Grid (Which adds 4 Health then 3 from absorb) but all on the 1st turn, then 3 Attack from the 2nd turn, it is roughly 3

more efficient than Tarsiers for the extra threat and attack.

If you have a unit with 4 or higher Absorb, such as Energy Matrix or Xaetron, Colossus will only offer a smaller amount of extra Absorb value, thus may not be the best option. If such an Absorber cannot either Soak or gain value by skipping its Absorb, Colossus should not be used to defend.

If Colossus is bought for one delayed defence, it is 5

more expensive than 2 Infusion Grid, which is generally a small price to pay for a strong attacker thereafter (if you have the necessary tech).

1 and thus be vulnerable to sniping (Can absorb for only 4, which is mediocre value). It is also countered by units such as Bloodrager or Lancetooth that can allow the opponent to spend away some or all of their attack on the turn you defend with Colossus, decreasing the absorb you get.