From Prismata Wiki
Jump to: navigation, search
Chrono Filter
Colorless unit
(see more)
At the start of your turn, gain 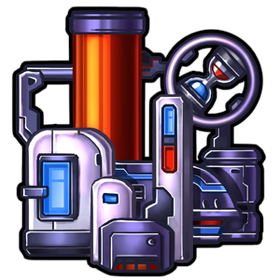 Chrono Filter is a legendary Colorless production unit. It produces one of both

Red resource, but only every other turn through its

Chrono Filter provides you with one

red only once every two turns due to its

2Exhaust. Only one Chrono Filter can be built. It is especially useful in Random sets with units that need both

red to build (for example, Hellhound) and for units where you need one additional

red, but do not want to purchase an additional Blastforge or Animus (for example, Amporilla off a single Animus).

Chrono Filter has the same gold-to-tech ratio than Blastforge and Animus: 1

gold for a total of 4

gold on average. Therefore it is perfectly fine to build if you can utilize it wisely.

A strategy is to build Chrono Filter early (going second on turn 2 for example, instead of an early Conduit) and then build aggressive units very early.

For example, in a random set with:

As a result, you can buy:

Thereby your tech is used to its fullest extent.