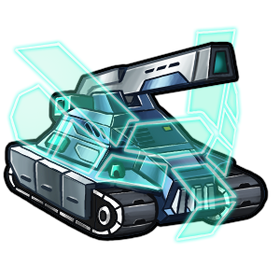 Chieftain is a Green-blue unit. It's an attacker and blocker with short

Lifespan, but lots of

Chieftain's main characteristic is its high

7 fragile health for a cost of only 8

As with all units with

Blocker, Chieftain is at its most efficient when used to take fatal damage on the turn that it would die due to lifespan, ensuring that all its health goes to use. This is especially important in the case of Chieftain, since

attack per turn can otherwise be obtained without the lifespan drawback for similar costs – two Tarsiers, for example, cost 8

red and provide the same amount of

, but can do it indefinitely.

The best way to use the Chieftain in this fashion is by creating a 'train' of Chieftains, buying one every turn from the first and using them to defend in succession. In this manner they all get full value. The difficulty in this setup is being able to predict three turns in advance that Chieftain's life won't be wasted in defense when its time comes.

In another use case, you may also block with the Chieftain up to 6

on its first turn by leaving it in defense and then just attack with it for two turns. This is actually quite powerful, since the Defense comes 2 turns earlier than usual, still having Threat, though it loses the Wall that would block the turn after, and some of its own pressure. This drawback is paid over evenly for Wall absorb (Below par with Colossus), otherwise, it's better to keep the strong Absorber.