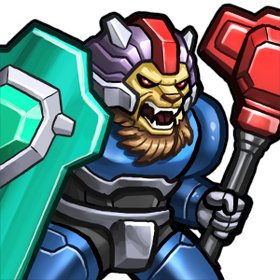 CENTURION is a powerful 2-damage attacker that can act as a 6hp defender at the same time. Oh, and it's ALSO PROMPT.

Centurion is one of the biggest and best absorbers in the game. Even Defense Grid is usually worse despite having more health, because Centurion is prompt, has unlimited Lifespan, has a more convenient tech cost, and provides

which is worth more than a few extra Drones. As such, its presence generally means you should go for a large economy of 20 or more Drones.

Because absorbing enemy damage is so important in Prismata, Centurion is almost always a must-buy even if it forces you to invest in tech buildings you didn't otherwise want. In those cases, look for units like Centrifuge, Chrono Filter or Flame Animus, which can allow you to cheat part or all of the tech cost of Centurion.

Because Centurion only has 1-supply, it's countered by units that provide constant chill such as Vai Mauronax, Shiver Yeti, and to a lesser extent Tatsu Nullifier. They can freeze Centurion every turn and deny its absorb. However, Centurion is not a terrible price for just two constant attack and six prompt defense, so even in these sets Centurion is often worth buying if the cost isn't out of reach given your economy and tech setup.

Because Centurion is so expensive, it's often difficult or impossible to buy it and defend against a burst attack (e.g. Grenade Mech, Protoplasm) in the same turn. In these cases you'll want extra resources/defense (Spare

s for Forcefields most likely) so you can buy Centurion without getting breached immediately. If your opponent can delay your Centurion, the game can spiral into disaster quickly.

The following is a common line for P1's Centurion if P2 builds a T2 Animus for Tarsiers. Faster

This line floats one blue and takes 2 damage on T6, and leaves P1 slightly overteched, but it does get Centurion out in a timely fashion. Note that if Player 2 goes full Rhinos to pressure, the common line must hold a Drone.

This puts 2 extra Attack, and gets Centurion while it defends well, if Opponent doesn't rush for 6 attack. It forces a drone hold vs such pressure though.

Player 1 Animus line can build it quickly against a High Econ opponent that sets up for ramping Attack.

The Centurion is deployed on a Turn that would require it, without a leftover Wall. This leaves the user overteched. If it can be delayed 1 turn, it's much more efficient.

This avoids overdefending while getting Centurion vs faster timing enemy attack. Improved with larger attack unit options such as Redeemer. Allows getting a Forcefield vs burst as well.

In the case that opponent starts a Fastimus rush with too much support on the unit set, such as Electrovore + Smorcus, etc.