As part of the Unified Community Platform project, your wiki will be migrated to the new platform in the next few weeks. Read more here.

unit
(see more)
When Borehole Patroller is bought, construct a Pixie.
At the start of your turn, gain 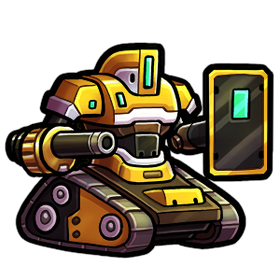 Borehole Patroller is a Green-blue unit.

Borehole Patroller is a pretty low-impact unit, but is clearly worth getting in a few situations:

Borehole Patroller is extremely useful in Lancetooth games; rushing one as your first attacker gives you an immediate

with which to buy a Lancetooth, and meanwhile the Borehole offers limited absorb so that you aren't punished as hard if you refuse to buy a Wall and your opponent decides to skip their Lancetooth.

It is also more efficient than most attackers when pressure is higher, since more of its attack is immediate, and can even

block for 2 at the cost of future attack, if required.

If the best attacker is Borehole Patroller, a rush can be practical. Player 1: