unit
(see more)
At the start of your turn, gain 1 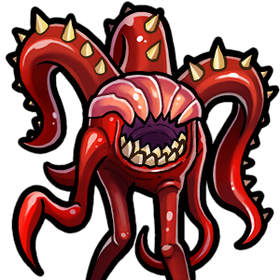 Blood Phage is a Red unit.

Blood Phage is a fairly efficient way to get both

, often more so than buying pairs of Drone+Tarsier. However the true strength of the unit is not in raw efficiency, but in the click ability.

The click ability is very versatile and can add significant value, being a strong way to spend

on attacking units, and a strong way to use the extra

when buying expensive odd-red units like Centurion or Shadowfang. Since Animus provides

, buying Animus to power the click ability is as efficient as Drones.

Blood Phage is a major enabler of rushes in what would otherwise be high-economy sets. The reason is that two of the biggest drawbacks of going low-economy in a set with big absorbers or powerful expensive attackers are that you often lock yourself out of buying the bigger, more efficient attackers, or end up wasting tech when you are forced to add two Blastforges for the Energy Matrix. Blood Phage mitigates both drawbacks: it provides tech sink through it's click ability and allows you to keep increasing your economy even as you buy attack.

It's not unreasonable to buy 1 or 2 Animus in a Blood Phage set just to buy and power the Blood Phages, if it fits well into your build.

Due to the efficiency of this build, player 2 is often motivated to go faster:

This early attack is especially good in a Blood Phage mirror match, because player 1 will be facing

already on the turn they want to buy Tarsier + Blood Phage. And if they go Rhino to absorb it, then they can't afford their Phage and will likely end up wasting red when they do decide to make time for it.

Note that starting this efficient line leaves a bad position to get Blastforge without wasting red, reducing the actual efficiency.