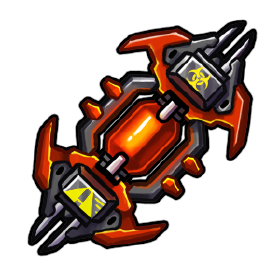 Blood Pact is a Red spell. It provides

attack for your opponent.

Blood Pact provides you with

Prompt defense through Husks while constructing a Grimbotch for your opponent. In the short-term it gives you the option to block

(gold and red), since the Grimbotch you construct for your opponent can immediately attack (And just after, either attack or block for

2, etc). Blood Pact is thus not extremely efficient, avoid relying on it if possible. It has many use cases:

Blood Pact is actually almost as efficient as Wall, cost per cost. It gives net 3 Prompt soak for 3R, essentially 2.5 gold extra at an efficient Soak rate, while opponent has 2 Lifespan turns left on the Grimbotch, which forces 1 Defense after, then blocks 2 Attack with 1 Threat at best, a loss of about 3 gold for the Blood Pact user.