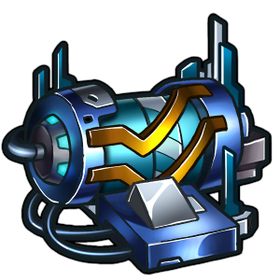 Auride Core is a Blue unit. It allows converting

Like with Thermite Core, Auride Core provides a valuable outlet for one

attack that would otherwise be absorbed, as well as allowing you to finesse your attack. The potential 2

gold of the Auride Core's Ability are counted in your next turn total gold so you better watch out.

If both cores are in the same set and you plan on getting one, evaluating which one is the proper buy depends on if you're pushing for a breach or if that extra gold would allow you to purchase more consistent damage. Usually Auride is better, because it has uses other than exploiting your opponent, such as helping you out when you don't have enough gold to spend your tech.

Due to its very low cost, even if it is not used even once over the game, it's not a huge loss, and sometimes the small value gained by trading one

Gold can help you greatly.