From Prismata Wiki
Jump to: navigation, search
Auric Impulse
Colorless unit
(see more)
At the start of your turn, gain 4 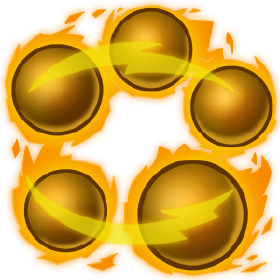 Auric Impulse is a Colorless unit. It provides a small

gold boost for the next turn.

For the same cost as a Drone, Auric Impulse provides players with strong option value. Even though it costs one

energy and requires cutting a Drone to buy, it provides an additional 1

gold the next turn by sacrificing itself.

The strength of Auric Impulse is that in certain reactive games, a player can delay purchasing decisions by one turn, see what the opponent is doing, and then move to counter the opponent's strategy.

Another major use of Auric Impulse is as a temporary economy boost. Because Drones cost 3

gold, they take 3 turns to break even and only start generating profit from the 4th turn onwards. Auric Impulse, on the other hand, returns its full purchase cost and an extra

gold the very next turn. Thus, some extremely fast rushes are possible by buying Auric Impulse in place of Drones. Keep in mind that Auric Impulse provides a boost of

gold for the next turn but it does not grow your economy as a Drone could have.

When buying Antima Comet, you generally save the rest of your

gold until the next turn to buy as many Engineers as possible right before the comet activates. By purchasing Auric Impulse in the same turn as the comet, you can buy more Engineers in the next turn than you would have been able to buy just by saving up