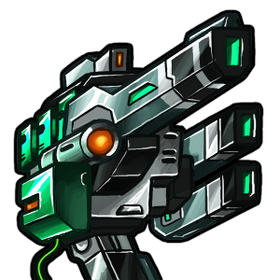 Asteri Cannon is a Green unit. It's strong attacker that can also be used to build defense by sacrificing its

Asteri Cannon is a strong attacker among Green units, able to provide

each turn. It can also be

clicked to create a Barrier to defend by giving up

Health. This Ability can be used five times by each Asteri Cannon. It makes Asteri Cannon flexible and an effective threat.

Asteri Cannon is extremely efficient, however, it is also extremely clunky - the most expensive non-legendary unit in the game, in fact. It therefore thrives in sets where you can afford to go for a massive economy capable of producing one every turn. It is also helped out if the absorber in the set costs little non-green tech, as you will be spending 16

per turn on just your green, making it hard to also spend the blue/red you have if your absorber is Centurion for example.

If a breach is inevitable, it is often better not to

16 make it very resilient to breaches, while creating five Barriers with it makes it very vulnerable. By

clicking your Asteri Cannon you are reducing your total health on board by 2. The user has likely used the ability as possible by then, so saving Health for a breach would not mean a good position. If the time window for defending is short, using only 1 Barrier or 2 per cannon still keeps a Breachproof state. Similarly, in games featuring Apollo it is wise to only create four Barriers to prevent Asteri Cannon from being targeted by Apollo (leaving it at

Be warned that Asteri Cannon can be countered by certain

chill units such as Cryo Ray or Shiver Yeti as these can simply freeze the Barriers and exploit their lifespan.

Asteri Cannon is also strong in breachproof, as it is slightly cheaper than three Gauss Cannons, but also can usually be clicked once without making it too good for your opponent to target them instead of your breachproof economy units such as Trinity Drone.

gold resources can be saved, Asteri Cannon is one of the only large units that can be purchased without a large investment in Drones.

From this point, depending on P1's actions, the Cannon can provide defense while P2 transitions into other units or just makes Asteri Cannons every other turn while improving economy. Note that much of the Asteri Cannon's value comes from the "free" defense it provides, so a rush is weak and easily countered by a mere Wall.

This line is lost by priority to the Player 2 rush version. With a cheap Green unit, it's possible to optimize the line with Turn 3 DDC /DCC.