From Prismata Wiki
Jump to: navigation, search
This article is a stub. You can help Prismata Wiki by expanding it.
Arms Race 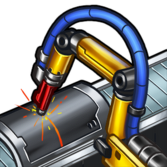 Arms Race is a Green-blue-red spell.

Arms Race is an extremely efficient way to increase your permanent attack. The resulting pile of Engineers will help your opponent little in the long run. Therefore, Arms Race is at its best when the long run is what counts: early in the game, preferably as your first attacker, or situations where your opponent already won't need the defense for a while (for example, because they have just fired an Antima Comet and will have plenty of defense for the next few turns anyway), because in those situations the Engineers are effectively having Build time added to them. Arms Race is a weak purchase when your opponent is already under pressure and can immediately make use of the Engineers as blockers (Being roughly 14

Attack vs 4 Prompt enemy defense, about 9

of Attack less for the user) though good if it forces inefficient Attack instead of Defense, or 4 Health is cheap anyway. It is also bad against opponents who are able to make use of the energy effectively (through Electrovores for example), and against opponents trying to get out greedy but powerful units such as Amporilla and Tatsu Nullifier as the free defense will help them achieve it. Redeemer is also a counter, since it makes the extra Defense very helpful to it.