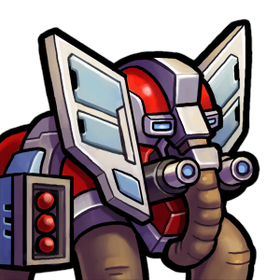 Arka Sodara is a heavy Blue-red

With its impressive stats and unique costs, Arka Sodara is a powerful unit that requires preparation to buy and use effectively. Although costing only 7

red costs and a hefty

7 attack for one turn prevent it from being bought in the early game. Unlike some other large units, the low gold cost and

prompt ability make Arka Sodara relatively easy to buy and defend comfortably on the same turn. Players should still account for the tech cost, since those red and blue resources won't be available to buy other

defense, though much cheaper than 2 Walls and a Rhino.

Arka Sodara has the interesting property of strongly countering itself if you go for it first and your opponent can also build it, as they can then deny you absorb on Arka Sodara's first turn easily by building it too. Let's illustrate that with an example:

As a result, the only way to avoid this issue is to wait for your opponent to get to roughly

13, so even if your opponent substracts

7 to their attack, you still get to absorb

prompt Arka Sodara. Again, this is only a concern if they have the required tech to build Arka Sodara and at least

7. If you get it and the opponent cannot immediately get it afterward, you can deny their absorb while still getting absorb of your own, making it an incredibly powerful play.

Although Arka Sodara is a strong attacker, it is usually better to leave it on defense, because if you attack with it you ultimately break even on value since you gain 4 attack and lose 4 absorb but you lose out on tempo because you have to buy 7 more defense right now and the opponent doesn't have to buy their 4 defense until half a turn later. Even if you have another absorber bigger than Wall such as Infusion Grid it is usually better to defend with Arka (Energy Matrix is big enough that it's probably better to attack with Arka). The only hard exception is if your other absorber is one that must be kept alive at all costs such as Centurion.