: Destroy any unit with 3 or less health.
[data page] 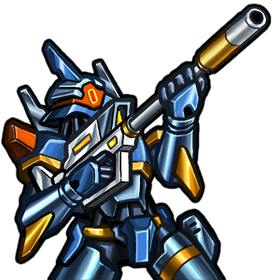 Apollo is a legendary Blue unit with an unique sniping

ability, allowing it to ignore blockers and destroy one unit with 3 or less health unit per turn.

Apollo is an extremely potent unit, being

able to instantly destroy any enemy unit with

3 Health or less. Its sniping ability is balanced by a high cost (in both

blue tech), the inability to attack, the lack of

block and a 2-turn construction. Its ability can be used to destroy enemy

Blockers in order to breach, destroy enemy attacking units in order to prevent damage and even destroy tech-producing units such as Blastforge, disrupting your opponent's production. While using it for destroying Blockers is OK if it deals 3 Attack, its strongest value comes from destroying Attackers when already under some pressure. Destroying one saves 1 point of Defense immediately, thus over 2 gold, and forever, which is as having paid 6 gold for permanent 1 Defense production. The defense for the snipe Threat is also left idle, which is worth about 2 Drones.

Apollo is best bought in random sets containing blue units that are able to deny Absorb (Manticore, Oxide Mixer) or overcome it quickly (Drake) to bypass losing value from being behind on attack against the absorb. It has a weakness to other high-tech

blue units able to prevent the Apollo from having Walls or Attackers to snipe, such as Omega Splitter or Energy Matrix.

Apollo is not as useful against enemies relying heavily on high-

Health units, or against opponents relying heavily on low-cost units and units that are already easy to destroy (such as units with

Lifespan). As a rule, before committing to Apollo, players should always search the random set for units that can be sniped, and which of those the other player is likely to use. If Cynestra, Tatsu Nullifier, or Lucina Spinos are in the set, for example, Apollo is probably something to get, or at least leave yourself the option of getting until you're sure the opponent isn't going for any of those units. It is also good in sets without very efficient Attackers, as replacing them is harder for the opponent.

A useful trick to know is that

4 or more can be damaged through other means, then destroyed by Apollo during the same turn by first inflicting them with damage to bring them to 3 health and then

clicking them with Apollo.

If you think your opponent is going to build an Apollo, building Conduits can be a smart play. Units produced using the

green resource tend to have high health, putting them out of Apollo's sniping range such as Gauss Cannon. Additionally, Conduits are relatively cheap, they are easy to replace if your opponent snipes them. Red and Green only defense can prevent the Apollo denying Wall absorb and 3-Attack value, as well as dodging the Threat if it snipes Attack instead (RRFE defense and Ts vs 4 Attack) . Getting a big economy and building high health blue attackers like Drake and Omega Splitter or even getting your own Apollo can be a valid strategy.