for each Engineer you have, and sacrifice Antima Comet.
[data page] 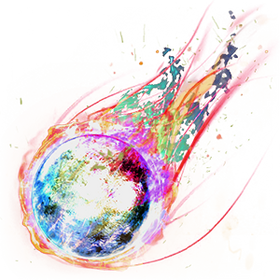 damage based on the number of Engineers you have.

Antima Comet is a unit that lets you build

defense in the form of Engineers and convert it into

attack power for one turn. Whether it should be deployed in the early or mid/late game depends on the random set units: if rushy attackers are available with no defense it can be bought early and followed by all-out aggression, while the presence of strong blockers favors waiting and strengthening your economy before going for a massive Antima Comet.

The technological requirements of the Antima Comet are hard to achieve efficiently if there are no special production units in the random set (Flame Animus, Chrono Filter), making your move towards Antima rather obvious to an opponent aware of it. Your strategy when going for an Antima Comet should be to buy it, then bank as much

Gold as possible to buy Engineers. Buying Engineers or not on the turn you construct the Antima generally makes no difference (except when you could be putting your

gold into Auric Impulses). On the turn before the Antima Comet hits, buy as many Engineers as you can for maximum damage on the following turn. You will be wasting colored resources on that turn, but the advantage gained from massing Engineers should be worth more, especially if you can start making use of all your resources as soon as the Antima strikes.

As such, Antima Comet is a tempo play. By itself it requires a huge investment to provide you with a big temporary advantage in both

attack. What matters most is what it can be transitioned into, both from your perspective and your opponent's.

damage or access to burst attack. The reasoning behind this is simple:

As a result, before going for Antima Comet you should ask yourself two questions:

So as always read the set carefully when planning your Antima Comet.

The Antima Comet costs 3GBR and takes 2 turns to build, so the return gain has to be over 13 gold to be good. A single Attack for next turn is worth almost 2 gold, so the turn before Antima hits, at least 5 Engineers must be bought to be even. The cost of getting the Engineers for little defensive value is very inefficient though, a group of 4 costs more than an Infusion Grid for example, that means another 2 Attack needed to break even, if the Defense value is also immediate. There's also the fact that starting Engineers and Absorb as well as opponent focus on Defending against the Comet, without too much attack, greatly diminish the value.

In cases where the set has fast

defense, an early Antima Comet makes more sense. You can go for it as soon as you have the tech available, spend two turns buying only Engineers, and transition immediately into constant

attack. It first forces your opponent to invest into a lot of (inefficient) defense, and then makes it awkward for them to answer with their own Antima Comet since you will have had time to build attack when it's ready. If your opponent chooses to transition to constant

attack directly, your Engineers will act as cover, letting you go for longer without having to invest in additional defense.

On the other hand, if the set is more defensive/economical, you should NOT go for an early Antima Comet. That's because you would open yourself to a stronger return Antima. Here's what the game could look like:

As a consequence, in defensive/economical sets, you should first go for a high economy before going for an Antima Comet. In that situation the Antima timing is the most important thing, as you have to get it first but not too early either. Your focus should be on building an economy strong enough to support buying the attackers you want, then building your Antima Comet, and transition into buying your late game attackers. Once again the pressure they provide should be enough to put your opponent off their own Antima.

If you mistime your Antima Comet you expose yourself to the same risks as when going for an early Antima in such sets.

Antima Comet has good synergy with units which either produce Engineers or benefit from having a large Engineer pool.

Chrono Filter
Chrono Filter is an exceptionally easy way to get the tech for Antima Comet faster, cheaper, and without as big a commitment.
Electrovore
Electrovore does not have much synergy in and of itself, but the large pile of engineers left behind after Antima Comet lands ensures that your Electrovores will be able to attack for several turns to come.
Sentinel
Sentinel's ability to produce an engineer means it adds an extra damage to your Antima Comet. This is a late-game synergy in most cases, as rushing Sentinels is usually not particularly efficient.
Hellhound
Hellhound is an extremely efficient attacker. When used in conjunction with Antima Comet, the extra engineer makes Hellhound a rather substantial damage burst of 2 damage for 5BR.
Cauterizer
Cauterizer is a very versatile unit when used with Antima Comet. The 4 engineers will of course add 4 damage to your comet, but the Cauterizer itself can be used either as a 3 damage soak or to add 2 additional damage to your comet volley. Note that buying Cauterizer, at 11 gold, is more gold efficient for damage than just buying Engineers on the Antima turn because it adds 6 damage for 11 gold, compared to 12 gold for 6 Engineers.
Auric Impulse
Auric Impulse is very effective when used the same turn that Antima Comet is built. Since it provides profit the next turn, 2 Auric Impulses yield an extra engineer, which is one extra damage.
Galvani Drone
Galvani Drone synergizes with Antima Comet in a few ways:

This produces an 11 damage Antima with 2 constant Attack.