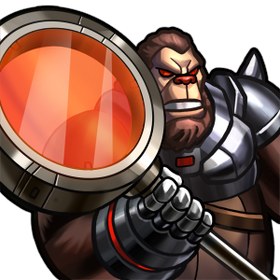 Amporilla is a Red unit. It's a strong attacker basing its power on number of Tarsiers already on the field.

With a sufficient Tarsier count, Amporillas can be easily the most efficient attackers in the game. Amporillas exhibit "quadratic" growth whereas your damage output is equal to (the number of Amporillas you have + 1 * the number of Tarsiers you have.

Amporillas are the only Red unit with

3, but since their usefulness depends on Tarsier support, solid defense is necessary to maintain their damage. It is usually useful to get a Blastforge for Walls when Amporillas are the end goal of a build order.

It is best to buy an Amporilla once one has at least 3 or 4 Tarsiers, as fewer than that is insufficient for the Amporilla to reach full value/effectiveness and you would be better off building more tarsiers. Even after a single pair though, it's not much worse than 2 Steelsplitters, while also giving "econ" by increasing the value of Tarsiers. Compared to 2x Fast Tarsiers (10

Amporillas are an incredibly strong counter to slow, high-defense strategies such as Zemora Voidbringer or Defense Grid builds. Building early or multiple Blastforges is therefore often fatal in an Amporilla set, barring strong blue offensive units. If your opponent fails to pressure you, you can easily start to amass four or more damage a turn, quickly overwhelming any defense your opponent could possibly build up. To counter Amporillas, a player must pressure his opponent so as to stop him from actually building an Amporilla, or else breach him soon after the first Amporilla is bought.

Units that allow you to get

comfortably are extremely useful with Amporilla, such as Chrono Filter and to a lesser extent Flame Animus. Centrifuge is also excellent as it allows you to buy an Amporilla without a second Animus when the red from the second Animus would probably just be wasted anyway.

Red defenders such as Corpus and Husk are also of great help; Amporilla strategies generally have no problem getting enough damage to overcome the opponent, instead, where they struggle is in defending themselves long enough for the opponent to crumble first. Since they also tend to waste a lot of red in the late game, Husk and Blood Pact are especially useful for its low gold cost. Nitrocybe and Ossified Drone pull double duty as they both sink excess red and provide defense. Blood Pact has particular synergy with Amporilla as it is mainly strong when the short term is what matters, and with Amporilla you will be willing to pay almost any long-term cost to get enough defense at a cheap up-front price so that you can keep buying those double-value Tarsiers.

Ferritin Sac is amazing as it allows you to buy a Wall or other large absorber without committing to an entire Blastforge.

Preemptive defenders such as Infusion Grid and especially Perforator help with Amporilla. The reason is that on the turn you buy your Amporilla, you likely won't be able to buy anything else, so having an efficient way to cover that turn's defend ahead of time can help tremendously.

Ebb Turbine is of immense help for Amporilla players. The reason is that when Tarsiers are double-value, you are more than willing to sacrifice Drones to get more of them. The click ability is already good most of the time in the mid-to-late game, with Amporilla, it's even better. Auride Core, while a very low-impact unit in general, is also useful because the 2

if it gets spent on something that is twice as good as it normally is.

If there are large absorbers available such as Centurion, the Amporilla player will be able to build enough economy safely that it will be almost impossible to stop them from buying an Amporilla and plenty of Tarsiers to go with it. Xaetron is especially useful for being a green absorber instead of a blue one; Forcefields are an excellent defender with Amporilla for their low up-front cost (just like Blood Pact), more so than Wall as you are probably overteched even without the Blastforge.

One of the best ways to counter Amporilla is to rush super hard so that they have to buy defence early on and won't be able to afford a second Animus and all. Units like Feral Warden and Grimbotch allow you to put out a lot of pressure quickly and force your opponent to play defensively. However, this is unlikely to work in sets with strong defenders such as Infusion Grid as these will simply absorb your rush while the opponent safely builds a large economy and then counterattacks.

Burst damage is extremely helpful. If there is a unit like Grenade Mech or Cluster Bolt, you may be able to let the Amporilla player buy their second Animus but then suddenly pressure them so much that they have to buy defense and waste all their

. Even if they do manage to get an Amporilla, units like these can let you force a breach since they likely don't have the tech for good defenders and kill their super-vulnerable Tarsiers.

Amporilla is also weaker in sets that have other strong attackers such as Hellhound or Scorchilla, since you are basically locked out of buying any other attackers besides Tarsiers if you want your Amporilla to get full value. (Hellhound still supports for Tech and defense skip purposes. Scorchilla could be outrushed)

One of the ways to buy Amporilla is to rush super hard.

Player 1 may use vs a passive opponent.

May play base line instead if Player 1 pressures. Mobile Animus improves Turn 5 greatly, allows either D, E, or next turn Click.

Gains 6 efficient Attack at the cost of over 4 accrued loss then, and 11RRRR tech, which loses a 6 cost Animus.

Gets 2 more economy but 2 less Attack.

Makes an Amporilla good value for the one turn it gets to Attack. Since the User got to keep buying Amporilla, it is forced to defend with E and Drone holds if without Red defense, such as Blood Pact.

Player 2 in High Econ (Centurion only)

Player 1 has to start from high Econ, which leaves Player 2 free to run a full Attack, or Defend normally if enemy rushes first, likely winning as well. Stall enemy as needed.

A faster version gets 8, then 24 Attack if it's faced with little Attack.

Rather inefficient, but delaying it will result in a sharp loss.

Pressures first, but it's inefficient.

Opponent won't avoid it without pressure.

This early rush has strong defense.

This leaves up to 19

to get for next turn. Doomed Drones out of

This combo gives a perfect combination of Defense and Attack.

Pressures much earlier while having some Econ.

This combination is very strong, as the extra Engineers act as soak that the opponent can't pressure through.

Does not waste resources, but Player 1 gets to go first, and has reason to. This build cannot be defeated by most Player 1 rushes, barring something like Tia Thurnax to break through. A standard turn 4 Rush would delay the second Animus, but a Blastforge and efficient Econ instead secure the setting needed to deploy.

This combination of Econ suport runs an Attack with excellent Defense.

Can be done if the Opponent does not prepare tech for Attack on turn 3. It can be delayed for the next turn against mediocre Attack.

The line is outruled by enemy red, as defending even RR pressure would require skipping EE for 1, to hold 5 Drones to block for 7 next turn. This means having 8 Attack, 5 Econ, 1 gold, and a Rhino left against enemy's sufficient Attack. Blood Pact and Ossified Drone make this a non issue.

Gains both Absorb and Attack efficiently.

Pressures early while having a Wall. Mobile Animus and Auric Impulse improve this greatly. Requires a constant sink for Red.

For facing a not too aggressive opponent.

Defensive rush which is value and priority based.

Player 1 counter with Centurion for Player 2 turn 2 Animus rush. This blocks and pressures the Amporilla back. May go second if there are

blue sinks, it should gain advantage either way.

Lines that start with only 2 Tarsiers can be somewhat efficient, require that opponent is unable to just rush normally.

This leaves 13 Econ, which is insufficient for getting Value for long.